The Recent Fiasco At The Mrs. Sri Lanka Beauty Pageant That Discriminated Against Divorced Women 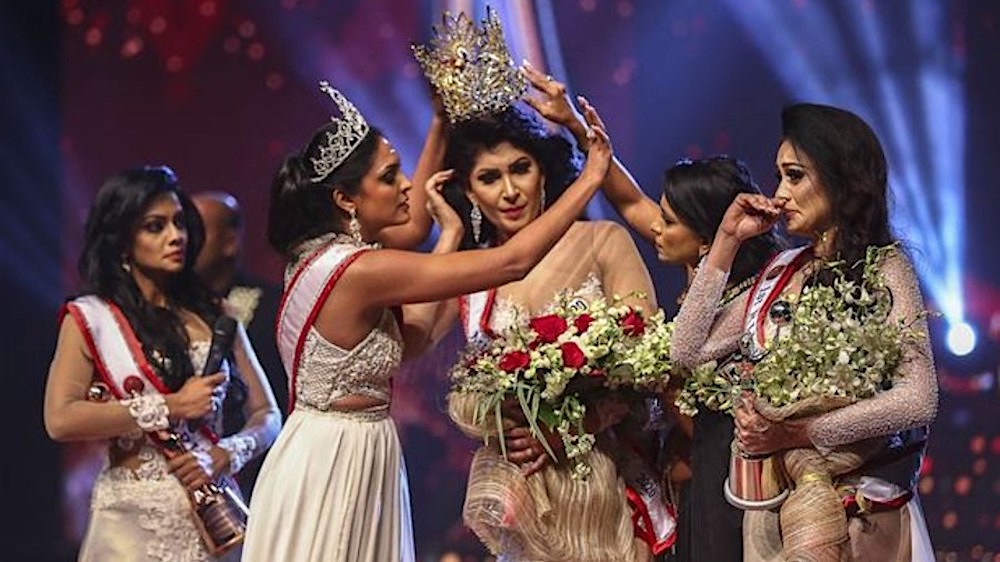 The 2020 winner of the Mrs Sri Lanka beauty pageant was forcibly stripped of the crown by the ruling one in an on stage fracas, because ‘she was divorced’.

The recent Mrs Sri Lanka beauty pageant, descended into chaos when this happened – ‘the 2019 winner of the competition and reigning Mrs World, Caroline Jurie, declared that the winner was ineligible because she was divorced, and forcibly removed her crown. “There is a rule that you have to be married and not divorced, so I am taking my first steps, saying that the crown goes to the first runner-up,” Jurie said, before walking across the stage to remove the crown from Pushpika De Silva, standing with a bouquet of flowers in her arms.’

So here’s how I imagine this scenario being reported.

It is Earth year 2021 AD. The past revolution around their central star has been a struggle for the planet and its occupants. A raging new virus, rapidly changing climate, and many losses related to both have left its citizens reeling. Among these disasters, further bewildering scenarios have been reported.

It has come to our attention that one half of the human race competes with its own gender in what it calls a ‘beauty pageant’. In this display of overt physical characteristics and apparent shows of select talent, as primarily decided and judged by the gender not participating, the female of the species willingly submits herself to scrutiny, critique and competition for the ultimate goal of winning male-gaze-defined access to earthly glory and the public recognition of what she already embodies.

Because the human race further likes to complicate its existence, not only do human females partake of the fracas, they agree to go along with strict demarcations of their own partnership status. Those not legally coupled, or ‘married’, as Earthlings call it, participate in jostling with each other in one group, and those who have signed on a parchment with another—the ‘married’ ones, are addressed by a different title and can only compete separately.

It appears the Earthlings must believe that the presence of a male partner is deeply radical and changes who the participant is at a molecular level. Further studies of these fascinating specimens of malehood must be undertaken to verify their lifechanging powers.

So they have a ‘Miss’ and a ‘Mrs.’ title, and the female of this intriguing species volunteers herself to be assessed and evaluated by complete strangers, who will then rank her worth on a scale and decide one of them is superior to the others. We see how well that’s been going for the planet.

Circling back to this intriguing episode: in one such pageant held on a small mass of land in the middle of vast waters, the ‘marrieds’ were straining to prove the confounding premise that female worth is predicated primarily on outward appearance and preapproved skill sets.

Some human societies maintain that royalty is an outdated concept, but in 2021, it is still acceptable to place a crown on the brain area of whoever is deemed the best of all her counterparts. This crown was placed on the ‘winner’.

Then, in an emotionally charged series of events, the crown was snatched away from the current winner by the winner from two years ago, with some confusion about the marital status of the former. The new winner was accused of being ‘divorced’, a term humans use for their signed partnership reaching its termination.

It would appear from our observation of the race that at least one gender becomes deserving of fewer or no points because of the loss of male-factor in their existence. They become, what is called ‘ineligible’. A research study into the chemical composition of these ‘marrieds’ is recommended, since their society clearly sees them as a discrete category, distinct from those who have not signed their lives away (yet).

After much high emotion and uproar, including the headpiece being placed on another married’s brain (it appears beauty can be ranked second- and third-best too), it came to light that there is yet another human condition: separated not divorced. And that makes this person whose beauty and talent was apparently the best of all, eligible to be the best of all again!

It would be reasonable for other races around the galaxies to conclude that this is how the humans derive their entertainment, but the episode appears to have played out in all seriousness, with no hint of irony or humor.

In conclusion, from our observation of the planet in general and this episode in particular, we believe that one group (or ‘gender’) is given rules that they internalize and play by, to the benefit of the other gender. They battle their own kind in their claim of a questionably worthy prize. And they further agree to put themselves in separate containers based on this element called ‘spouse’, which is just the male of the species.

This race is clearly fascinating and requires further scrutiny.

Until our next report, over and out.

The post The Recent Fiasco At The Mrs. Sri Lanka Beauty Pageant That Discriminated Against Divorced Women appeared first on Women's Web: For Women Who Do.