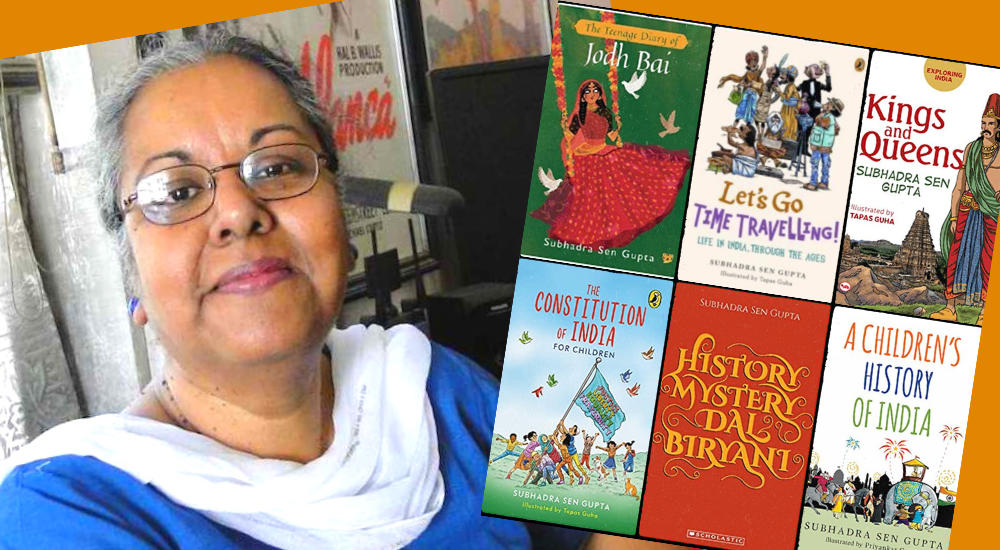 Subhadra Sen Gupta never underestimated children, for whom she wrote her books, making History fun, as it should be taught to us.

Celebrated author Subhadra Sen Gupta, a titan in the children’s literature space, passed away on May 3rd, due to COVID; she will be missed.

A simple browse through Subhadra Sen Gupta’s Facebook page reveals a love for literature and a joy for sharing this love with the world. This penchant to share her love is amply evident in her life’s work – writing books for children.

Subhadra Sen Gupta is known famously for historical fiction, but she also wrote extensively in a variety of genres like travel, mystery, non-fiction and horror. Her books have been published by renowned publishers like Penguin, HarperCollins, Scholastic, and many more. The life and work of an author who contributed so tremendously to children’s literature deserves to be remembered, celebrated and honoured.

The importance of learning History

Subhadra Sen Gupta began writing in college and with a master’s degree in history,  she started her career in advertising. However, she realised that children, who she believed to be the ‘best readers’, found History to be simultaneously boring and intimidating.

In a piece she wrote for Saffron Tree, a site dedicated to children’s literature, Subhadra Sen Gupta talks about why History is important.

Many of us, often when we’re in school, wonder about what we stand to lose should we stop studying history. Subhadra answers by first accepting the complexity and depth that defines history and could be intimidating, but moves on to stress that this very complexity defines us and our present. There are a variety of histories which she lists, culinary, musical, fashion and so on – all of which are important for us to know to keep our ‘civilisation’ going.

And so her journey began to make history exciting for children, with a tinge of humour one can find in most of her works. However, history for her wasn’t simply about dates and names. She wanted to focus on people and who they were, not just on what they had done. In that same blog post, she advised parents to take their children to tangible pieces of history and to make learning more lively and interactive.

In an interview, which rightly called her the Queen of Historical Fiction, she mentions that her work isn’t just about facts, but about what makes those interesting. This is what makes her work so beloved to many- through her writing one is able to imagine what people in the past believed, felt and how they lived, in a way that is personal, yet also informative.

While history definitely was her forte, she also understood children as people who observe and understand more than one may assume. In December 2020, in an interview with The Hindu, while talking about her work she said, “There is a clarity and logic in children that helps me present complex subjects and know they will understand. I have discussed everything from the caste system to religious tolerance and have been amazed at how they respond.”

The author also paid attention to the contemporary world around her and responded to it through her work. When she believed that the Indian Constitution and its ethos were lost to the Indian youth, she wrote The Constitution of India for Children, which was illustrated by Tapas Guha. The book’s aim was to provide an understanding of the process and ideas that underscore the Constitution.

One can thus discern an overarching aim that guided Subhadra through her writing – to make knowledge accessible and alive. She herself was approachable and children from across the world would write to her, asking her questions and giving their opinions. Despite the amount of work she was engaged in and the number of people who were writing to her, Subhadra would respond.

It’s no surprise then, that an individual this passionate and committed was widely recognised for their sincerity. Her book, Mystery of the House of Pigeons, was adapted into a six-part television series aired on Doordarshan. Three of her books, Twelve O’Clock Ghost Stories, The Teenage Diary of Jodh Bai and A Clown for Tenali Rama were awarded the White Raven Award at the Bologna Children’s Book Fair. In 2015, she was awarded the Bal Sahitya Puraskar by the Sahitya Akademi for her contribution to children’s literature in the English language and was honoured with the Big Little Book Award 2020 for her significant contribution to Indian children’s literature.

Subhadra’s death was announced by her cousin, artist Shuddhabrata Sengupta. “I will miss her completely zany sense of humour, her endless treasure of stories, her no-nonsense spirit, her love for Delhi and her passion for life, for history, for freedom and for adventure,” the post read, like the several other posts online that expressed their sorrow, love and respect. Despite her passing, Sen Gupta’s work has made her eternal and the indelible mark she left on children’s literature will forever memorialise her love for a good story.

Penguin, in 2018, posted a piece on 8 lesser-known things about Subhadra and it mentions the one thing she wanted from her readers- a time machine so that she could ‘exchange funny stories with Birbal and then join Emperor Akbar for lunch’. One hopes that when she had passed on, Akbar and Birbal were the first to greet her with an invitation for endless conversations.