‘Lady Doctors’ Are The Norm Today, But Do We Know These 6 Trailblazers? The stories of the trailblazers in Kavitha Rao’s book Lady Doctors: The Untold Stories of India’s First Women in Medicine, and the challenges they triumphed over, need to find their rightful place in history.

Do you know a woman doctor? Of course, you do! What a strange question!

Women doctors are the norm today. But this wasn’t the case at the turn of the nineteenth century. In fact, the conservative Victorian society and the purdah system meant that women were often not even allowed to see doctors and receive health care. The ideas of women training to be doctors were unacceptable and would have remained so if it wasn’t for a few women who were determined to change things.

‘I had even then set my heart upon something high and I wanted to be a different woman from the common lot’- Muthulakshmi Reddy.

These words, which resonate with so many of us today, were the dream of one of India’s pioneer woman doctors. In her new book Lady Doctors: The Untold Stories of India’s First Women in Medicine, Kavitha Rao tells the story of 6 pioneers. The well-researched and referenced book speaks about stereotype-shattering women doctors from across India who displayed striking courage and tenacity. They were the harbingers of transformative, radical change, not only in medicine but also in society. Yet, they have been forgotten, or as Rao writes, erased from history.

The 6 Lady Doctors featured in the book

The book begins with Anandibai Joshi’s plea to go to the USA to study medicine. She would eventually become India’s first woman doctor. Her impassioned letter to her husband where she writes that “A Hindu woman has no right to utter a word or to advise her husband” highlights the physical and emotional violence that she faced at the hands of an outwardly supportive spouse.

The other pioneers whose journey’s the book chronicles are equally inspiring. Kadambini Ganguly, the first Indian woman who practiced as a doctor also waged a battle for medical education for women in India.

Rukhmabai Raut, a radical beyond imagination, called out child marriage, sought a divorce, and took on a luminary like Bal Gangadhar Tilak before embarking on her medical training.

Haimabati Sen studied and practiced medicine overcoming huge setbacks of poverty, ill-treatment as a widow, and abuse. Yet, she “handed over her scholarship money to her husband to spend the way he considered best”. It is apparent that even education did not result in true emancipation for many of these women.

Muthulakshmi Reddy, who had a career as illustrious in public life, as in medicine became a beacon of inspiration for many. Mary Poonen Lukose, India’s first female surgeon general, laid the foundation for Kerala’s robust health care system.

Following dreams came at a price for these women

Women who have dared to dream have always paid a price. So did these women.

The burdens of caste, society, misogyny, oppressive patriarchy, and poor social status ensured that the price multiplied manifold for these pioneers.

Steadfastly holding on to her identity as a brahmin and a wife, Anandibai‘s health suffered to the extent that she died even before she could practice medicine.

Haimanti Bai was ‘awarded a silver medal for coming first’. The fact that she accepted it so that she can afford to care for her newborn baby was a heart-wrenching reminder of how women’s sacrifices are completely disregarded even by those closest to her.

Unhappy marriages, imperfect family lives, no parity with male doctors, prejudice at the workplace, discrimination in awarding degrees and job opportunities, sexual harassment were also routine occurrences for these doctors.

The hardships that came the way of these women took me back to my college days.

It was a common experience to have patients refuse to be examined by us and demand a male doctor instead. This misogyny is something that almost all women doctors continue to face even today.

Being called ‘sister’ and not doctor is also a universal experience in the life of a woman doctor; the result of the ingrained patriarchal beliefs that women cannot occupy positions of knowledge and authority.

As I read the book, though, I couldn’t help but wonder, if things had progressed as much as we liked to believe.

The author writes in her account of Dr. Mary Poonen Lukose: ‘Then, as now, women who worked outside the house were still supposed to prioritize their family and house.” This double burden has been normalized by society for years.

Today medical education is open to all, and women are encouraged to take up this career. Such is the legacy that these women have left behind, that many families view it as an ideal career for girls. But this book is a reminder that the burdens of patriarchy, gender stereotyping and societal expectations have not changed all that much, even though more than a century has passed.

While almost an equal number of men and women join careers in medicine, there is a definite genderization in the profession that has been experienced by many of us. Women are traditionally advised against selecting physically demanding specialties and are expected to focus on areas of medicine that ensure a better work-life balance. This is in keeping with the expectations that women will have the larger share of caregiving and domestic responsibilities.

More women drop out of medicine than men. Extended working hours and the need for emergency visits are often seen as something that will be ‘unacceptable’ in the woman’s marital home. Some fields like cardiology and specialized surgery have an especially longer duration of training, and women are unable to pursue these due to other commitments and responsibilities.

It is common for women doctors to compromise on their career choice to do justice to the roles that society demands they play. Most of us practicing doctors struggle with support systems that are far from satisfactory and have had to work doubly hard to be treated equivalent to our male counterparts. Women occupy much fewer senior-level, decision-making positions than men in the field of health care. There is no doubt that medicine, in spite of being a much sought-after career prospect, remains an unequal playing field for the female gender.

Stories, not just of women in medicine, but also of feminist trailblazers 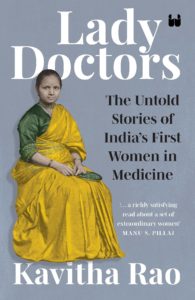 I wondered why the mention of these iconic women had not made it to my textbooks? Probably, as is often the case, because history is written by men? Erasing women’s contributions to medicine, or any field, reinforces narratives of male dominance, after all.

The stories of these women, and the challenges they triumphed over, need to find their rightful place in history. This book is an essential read not only for people in medicine but for anyone who is interested in narratives of the feminist movement.

After being part of the remarkable journeys of these women, having their photographs in their book would have added immensely to the experience.  I can imagine that this is the result of a lack of archival matter, another sad reminder of their almost complete erasure from history.

Want a copy of this book?

If you’d like to pick up Lady Doctors: The Untold Stories of India’s First Women in Medicine by Kavitha Rao, use our affiliate links at Amazon India.

Women’s Web gets a small share of every purchase you make through these links, and every little helps us continue bringing you the reads you love!

Every fortnight, we send out a special mailer for working women (or those aspiring to work), with useful resources, tips and ideas. Sign up here to receive this mailer.

Shalini grows through her roles as mother and a doctor. She believes that both the

The post ‘Lady Doctors’ Are The Norm Today, But Do We Know These 6 Trailblazers? appeared first on Women's Web: For Women Who Do.