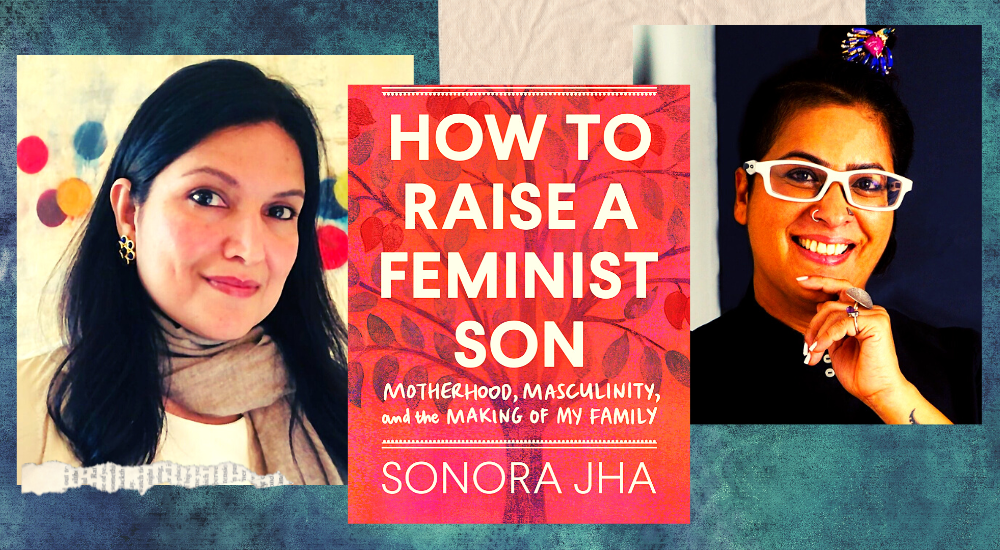 It is not enough to teach a child about feminism, says Sonora Jha, author of How to Raise a Feminist Son, in a chat with Raga Olga D’Silva, but to model behaviour we want to be internalised.

Author, entrepreneur, and LGBT influencer Raga Olga D’ Silva has always invited the best of guests to her shows. From The Other Side (2020) was a series of engrossing live chats where she brought in motivational speakers from various walks of life.

In recent times, she has been multitasking with her Coming Out Stories From India interviews and a second show titled TODAY With Totally Out Now.

Premiering on July 21 was Raga’s brilliant conversation with Sonora Jha, whose recent book,  How To Raise A Feminist Son has earned appreciation and has also opened the doors for discussion.

What was special about this chat was that rather than being a typical Q & A session, it was more of an intelligent exchange of observations about life and reality between the two women. Feminism, patriarchy, misogyny, cancel culture, and othering were all discussed in this show. From this thought-provoking conversation with a wide range of topics, I found some particularly interesting.

Feminism has been painted with various shades and hues

It is really sad how feminism has been misconstrued by men and women alike. Raga recounts an incident in which she was asked at a conference if she was a feminist. In spite of being one, she had to think before answering. Since she is a member of the LGBT community, she was concerned that one might jump to the conclusion that she hates men.

Feminism is a practice and a value system, and Sonora takes pride in owning the label of a feminist. She discusses that many women do not want to wear the tag of being a feminist because of the way it has been misunderstood as encompassing nothing else but bashing men. Sonora asserts that she is “a men-loving woman” and has issues only with those men who are trapped in the notion of masculinity, and are so emotionally immature that they seek to separate themselves from the women.

It is important to do the whistle-blowing to correct offenses

Sonora insists that we need to call out those who are not being respectful to women. This will ensure that women get their rights.

It is our responsibility not to encourage anyone by laughing at their ridiculous remarks and sexist jokes, and this needs to extend beyond our homes and be directed towards the actions of our  leaders as well. When we say “men will be men” or give them the benefit of the doubt because of their age, we are just letting the cycle continue. Everyone is capable of change, so we need to put a stop to this despicable behavior .

“Why do we think that our girls will be happier, if we are not calling out the men in our lives?” Sonora asks. Referring to her book, she elaborates that she does not believe that her son will lead a good life if he thinks he is macho, the protector, the provider, and someone who is always winning and is not vulnerable nor has to apologize. “Feminism is loving man”, she says. We are helping them when we educate them about the right values in life.

We do not realize the agony of others, when we ourselves get the best

It is indeed a moment for reflection when Sonora lays bare the truth that privileges make us blind “to other people’s otherness”. She ponders on how she felt it was important for her to raise her son in a culture where he was somewhat marginalized. “There is so much power in being on the fringes,” she says. It steeps one in the struggle and helps one to be in solidarity with the pain of others.

Raga presents her point of view by saying that when we talk of othering, we need to remember that we too are the “others”. While pointing fingers at others, we should not forget that society is not separate from us and we too need to conduct ourselves in a responsible way.

How does one raise a feminist son in a society where patriarchy still exists?

In response to Raga’s question of how Sonora instilled the feminist priciples in her son, she has a beautiful answer. It was not a drill where she would call her son every morning and give him feminist lessons. It was more of a value system where he learned by observing her leading a feminist life and enjoying the joys and freedom encouraged and allowed by feminism.

It’s all about raising a child without having separate rules for a boy and a girl. I loved it when Sonora said that she had this strong position: “I am going to let my boy be gentle, I’m going to let him cry, I’m not going to tell him that…boys don’t cry”. Bringing in a feminist loving attention and finding a feminist village are what is required. It is also important to recast those conversations that we hear within the family and discuss with our sons if anyone is not being respectful towards women.

Why can a boy not make a cup of chai?

A mother of a twin boy and girl, Raga believes it is very important to look through a perspective of a boy and a girl having the same footing.

She shares how her mother was taken aback when she asked her son to make a cup of chai. She is happy that her twins accept the same responsibility while cooking, doing laundry, or performing other chores around the house.

Raga wonders why feminism did not exist naturally in a society that worships Sita and Kali. Sonora has a very smart response when she says that we have made women devis to be worshipped, but we have not humanized them. People fail to understand that women have emotions. Goddess Kali, for instance, is allowed to be angry, but a woman’s anger is looked down upon and not accepted as a natural reaction.

Racism, sexism, and patriarchy are issues that are all interconnected

All struggles are interconnected, and it is important to have equality in all spheres of life. Sonora makes a very pertinent point when she voices that  “if we don’t struggle for ‘Black Lives Matter’, we are not struggling for women either”.

Patriarchy is not about men alone; it involves a system where women are included as well. What a fine observation Sonora makes about how women sometimes emerge as the best-foot soldiers of patriarchy when they police other women and tell them what to do!

Raga brings up an incident from the past in which she was asked a ridiculous question. At a birthday party, when asked where her husband was, she mentioned that she had been separated from him. A few women then asked her who would take care of him. She wishes for the world to expand and for women to get out of the mindset that they have been born to “marry, procreate, and then become housemaids.”

People do not get canceled

Those of us who grew up reading the books of Enid Blyton are saddened to hear the  controversy surrounding the late author. Her works have been criticized as elitist, sexist, racist, homophobic, xenophobic, and lacking literary merit.

The topic of cancel culture comes up in that context, and Raga raises the question if in present times, a child might get confused between the old narrative and the new narrative. Sonora expresses that people do not get canceled; they simply get contextualized for a little while. She does not discount that there might be issues in the books of Blyton. But rather than throwing them away, we can make our children read those books and have conversations with them, providing them with the context about when those books were written. According to her, when we talk about cancel culture, we are actually talking about a consequence culture.

Sonora happily shares that How To Raise a Feminist Son started as a self-expression where she wanted to tell the story of her life, but it has served another purpose as well. Her use of the term “feminist son” has raised an eyebrow or two, and she has been told that it is quite jarring. Sporting a smile, Sonora tells Raga that she did want to push the envelope a little bit! She ends the conversation by leaving the message that a new world is possible and that we all need to come along.

Born in India, Rashmi Bora Das moved to the United States in the early nineties.