Kasturi Patra’s debut book A Mother’s Goodbye is a layered tussle between wishes and reality, and stays with you long after the last page is turned.

Growing up, I often wondered what it would be like to have all the freedom you could possibly wish for. As a child, I was often left home alone, and despite being an only child, I rarely missed company. I had the company of books, something that has held me in good stead over the years.

In the later years however, when I often wished to be left alone for days together, it never happened. My mother’s college teaching job allowed her to get home even before I did. On days when Ma wasn’t home, Dad would be.

Never had I ever stopped to think what life would actually be like were I actually left to be on my own. How I would manage my meals? Would I be able to maintain the house on my own? Who would cook and wash the clothes or utensils? Fortunately, even when we fell on hard times, I never actually had to manage the house on my own or go out to earn money.

Picking up A Mother’s Goodbye

When I first read the title of Kasturi’s book, I wasn’t sure what to expect except a really good story. I’m one of those people who is familiar with her writing and her stories, and if there was anything I was sure of, it was that I would grab her novel with eyes closed. So, you can well imagine the jubilation I felt when her book finally released.

The story begins with Mou coming back from school one day and discovering her mother is gone – with no more than a small note that raises more questions than it answers. How the three children – 16 year old Mou, her 17 year old brother Avik, and a much younger, 8 year old Ishaan – manage without their mother, and their own journey as they navigate through life while they look for their mother, is what forms the rest of the story.

Women, the ‘sacrificers’ and ‘nurturers’

How many times have we come across articles, comments, and even relatives who state the biological reproductive abilities of women as the reason for their better parenting skills.

How many times has a woman been expected to sacrifice her dreams, ambitions, her entire life, in favour of child-rearing and home management?

As children, how many of us have thought about what all our mother must have had to put on hold, just because her family needed her more?

Hasn’t every mother felt this way – ‘I loved them to bits, but hanging around them all the time was simply becoming too much to bear’ – at some point or the other?

Equally undebatable is the fact that this line of thinking is not just misogynist but also patriarchal. Insist that women are better at staying at home – restrict them from availing of job opportunities, earning their income, and being independent – and it’s easier to control and dominate them.

Forced to grow up too soon

As the story continues, and the challenges that face the young children come forth, it makes one keenly aware of one’s own luxuries and privileged childhood. At a time when Avik and Mou should be concerned about studying or playing or chatting with their friends or even just discovering their own selves, the circumstances force them to consider bigger issues like how to put food on the table. The mystery becomes deeper and deeper, even as the children are forced to grow up too soon.

‘Now someone seemed to be pushing me down a precipice into an unknown land of adulthood, and I wished that I could go back to my stupid childhood problems.’

‘If anyone heard our happy voices piercing the silence of the night, they’d think we were being typical teenagers. How could they’ve guessed that the three of us were trying so hard to be normal teenagers, and would give anything to get back that carefree life?’

The characters, young children left bereft because their mother left without an explanation, are well-etched out. Their struggles make one question as well as empathise with the mother’s decisions.

But, surely the mother has her reasons?

At the same time, you’re left wondering why their mother (or, any woman, for that matter) would ever leave her children like this. Some part of you aches for the woman that she craved to be while some part of you is furious at her for being so irresponsible.

And this inability on the reader’s part to decide whose side they are on is wholly due to the power that is in Kasturi’s writing. She doesn’t make any judgements and offers no solutions, and she ensures you can’t either. Interestingly, in that lack of any concrete answers lies the essence and the strength of this book.

‘She tried to make us happy. Through small gestures she showed us that though we had one parent, it was enough. But what about what she wanted? Did we ever ask her that? We took it for granted that her happiness lay with ours. But she was an individual, too. What were her dreams?’

‘I thought of the little time that I had to sacrifice being with my friends to babysit Ishaan and how miserable I’d felt.’

While the book delves into the impact the mother’s decision has on the children, it also explores the pressures and burdens of being a parent, and the individuality, dreams, aspirations that a woman leaves behind when such societal expectations are dumped on her.

This isn’t about what it means to be a good parent but about how human it is be for one to make mistakes and have regrets, or even want to have a life where one doesn’t have to forsake their passions, desires, and interests. Does she stop being a woman just because she is a mother? Does she stop living her life where her happiness and her existence matters just because her children’s happiness is expected to take precedence? At what point does she stop living for others and start living for herself?

Not just a woman’s story 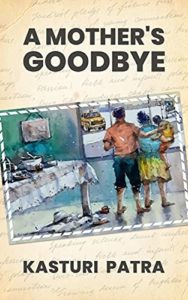 What’s truly commendable about Kasturi’s book is that it’s not just a story about a mother or her seemingly questionable parenting skills. It is also a story about bashing patriarchy, gender-equality, and personal agency & identity, and all of these are dealt with in a responsible and sensitive manner.

The simple writing but impactful imagery makes one feel like you’re part of the scene that’s unfolding. Not just the scene descriptions, the dialogues, or the relatable characters that bring the story alive; but the way the characters feel yet hide their true emotions, the struggles they are trying to overcome and yet not burden a loved one with the internal conflict they are battling all make it seem as if you too are experiencing each and everything little fear, anxiety, and joy that the characters are feeling.

This is one of those stories that any writer when they read it would wish they had written it.

J.D. Salinger famously wrote ‘What really knocks me out is a book that, when you’re all done reading it, you wish the author that wrote it was a terrific friend of yours and you could call him up on the phone whenever you felt like it. That doesn’t happen much, though.’

Luckily for me, I can call Kasturi and tell her exactly what a terrific book this is.

Disclaimer: The writer of this article is a close friend of the author of the book reviewed, and is one of the people mentioned on the acknowledgements page of the book. Nevertheless, the above article has been written with the utmost honesty that would be expected from any writer who loves their craft.

Want a copy of this book?

If you’d like to pick up A Mother’s Goodbye by Kasturi Patra, use our affiliate links at Amazon India, and at Amazon US.

Women’s Web gets a small share of every purchase you make through these links, and every little helps us continue bringing you the reads you love!

Are you a woman entrepreneur doing cool stuff? Fill up our form here and we may feature you!

The post How Often Is A Woman Asked To Sacrifice Her Dreams, Especially A Mother? appeared first on Women's Web: For Women Who Do.

Ahilyabai Holkar Queen Of Malwa, Whose Reign Brought In A Golden Age For Her…