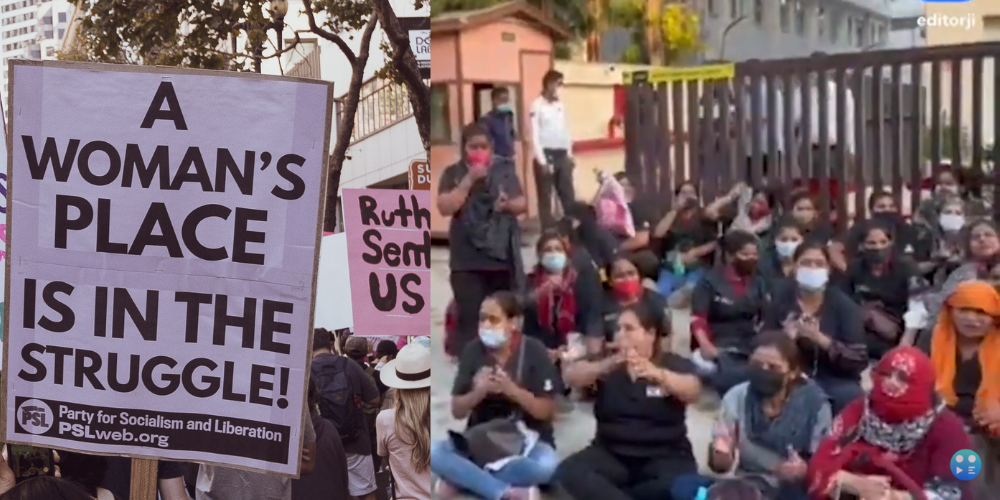 Recently,  Urban Company was in the news when over a 100 women working as beauticians and salon experts with them took to the streets protesting against low wages, higher commissions, poor working conditions and lack of insurance.

They went on a day-long strike outside the organization’s office in Udyog Vihar. They also did not accept any bookings over the app for two days over the last weekend.

What changed that women employees had to come on the streets to protest?

Urban Company previously known as Urban Clap is one of India’s largest home services platform. The Gurugram-based start-up connects people looking for a specific service at the comfort of their home or office to experienced professionals who provide that service.

The protests by women employees were very surprising since just 10 months ago, the Fairwork India Ratings 2020 Report rated Urban Company and gave them a score of 8 on 10 (Fairworks India judges several digital companies including Zomato, Ola, Swiggy, Flipkart and Uber. This rating was based on several factors including fair pay, conditions, contract, management, representations and more.)

So what changed in just 10 months, that the women had to come on the streets to protest?

Issues of safety & alleged ‘sly tactics’ by the company!

The women employees alleged that Urban Company raised the commission that it charges them up to 35%. They also alleged that the company indulges in unfair trade practices and has no provision for insurance. They had been voicing their grievances since the last three months and had reached a dead- end.

According to the Entrackr, the women have several grievances. “Subah 7 se raat k 9-10 baj jaate hain, ghar pe bache ko taala laga k aaye hain (we leave for work at 7 in the morning, we have to sometimes lock out kid at home),” said a woman striking against the company. “Is it safe for a woman to be going to someone’s house that late in the night?” a woman protesting against the company questioned.

Poonam Parmar, a beautician who has been a partner since 2017, claimed the company had been resorting to ‘sly tactics’ of arbitrarily blocking IDs and down rating partners if they refused bookings.

Another beautician who requested to stay anonymous stated, “Often we have to refuse or cancel a booking if a place is far or due to safety reasons. I stay near Sohna, so I cannot attend to a booking in Manesar late in the evening. But if I refuse bookings, my rating goes down and this affects future earnings and invites a penalty.”

We need to understand that blocking of ids and down rating the professionals on the app will only result in loss of opportunity and income for women. While these allegations are being looked into, the claims by the women workers are certainly concerning.

On one hand we talk about empowering women and creating opportunities for them. On the other hand, we make situations and working conditions so difficult for them that they are forced to go on strike and even quit their jobs in the worst case scenario!

The woman further stated that the company forced them to buy beauty products from them instead of the market where they get better rates. Some of the women alleged that if they accomplish less than 30 jobs in a month, they are charged Rs. 2000.

They were even sent a message by the company cautioning them against calling for a strike through their official communication. “Urban Company will take strict police action against anyone who stops other partners from going to work,” read a message sent by the company on their app. The message has been widely circulated on social media handles.

We are in the middle on a pandemic and have still not recovered completely, small businesses and professionals are the worst hit. Is it fair to charge them these commissions or to penalize them for fulfilling less than 30 jobs a month? People are still wary of calling outsiders to their homes in fear of getting the virus. What can the women who work as beauticians possibly do if they don’t get business?

The social and economic impact of any pandemic is harder on women than on men. They are the primary care givers and were burdened with additional responsibilities after the schools & offices closed down. It is high time we address the issue of gender equality, fair wages and equal opportunities for women.

Financial advisory firm Valpro’s director Neha Khanna told Business Insider that as any company scales up, their overhead costs increase as well. This can include marketing expenses, operation costs or more. So cutting a higher percentage out of gig workers is an easier way to generate more revenue, and that is majorly why the gig worker’s conditions depleted further.(Source Businees Insider)

We don’t know if the same holds true for Urban Company though, only time will tell.

Companies like Urban Company, Zomato & Swiggy have had employees protest on the streets or on social media!

In response to the protests Urban Company released a statement mentioning that they as a company are not perfect and may have made a few mistakes in their journey. They further added that in the coming weeks there will be announcements regarding various programs to increase the earnings of their partners.

Anushree Jairath who recently used Urban Company’s services tweeted that the workers are fearful of doing anything wrong because of the perpetual threat of removal.

In 2019, nearly 200  Zomato delivery partners were on strike as their pay structure was revised. The new structure reportedly broke down the previous assurance of ₹40 per delivery into ₹30 being fixed, and the rest ₹10 as variable based on user feedback. In January, Zomato had allegedly stopped monthly incentives based on the number of deliveries.

Zomato and Swiggy were recently in the news a few months ago when two delivery partners tweeted anonymously from the handles SwiggyDE and DeliveryBhoy about how the food delivery companies were exploiting them. They were soon joined by many other Swiggy and Zomato workers.

The partners struggle with low base pay, late working hours to meet targets and job insecurity.

As reported by News Laundry “Delivery workers are also required to use their own bikes and pay on their own for things like fuel, repair and maintenance, phones and data plans, and company merchandise such as t-shirts, phone stands, and phone covers.”

The Twitter handle Deliverbhoy recently tweeted that partners with Zomato are not entitled to claim any reimbursement of hospitalization and bills that may be incurred while rendering delivery services.

For women employees to excel, workplaces have to offer them basics like safety & equal pay!

Zomato publicised that it is hiring women as their deliver partners by providing them incentives and flexible working hours. They vowed to have at least 10% delivery partners in three cities in 2021 as women constitute less than 0.5% of their fleet. Please re-read the number to realise that not even 1% of women constitute their workforce.

We should all be shameful that even after so many years of progress and so called equal opportunity we see such a paltry number. If the already existing partners who happen to be men are facing so many issues with the company then we can imagine how many more issues women will face. Isn’t it high time we try to provide better opportunities and an equal pay to our women?

Companies that don’t hire women are missing out on the many talents and skills of half the population. Equal representation of women in companies can not only have a positive effect on the business but also promote gender diversity. Let us create a workplace that is conducive for women and sensitive to their needs. It is important that we work on this with urgency lest we lose significant female talent.

Women don’t hold back nowadays in voicing their thoughts and grievances at home and especially in the workplace. In spite of the progress made by women in the workplace there is still a long way to go. If we want more women to participate in the work force we need to empower them and provide them with the basics such as insurance, flexibility, professional development trainings, safety and equal pay. Only then can women truly excel at what they do.