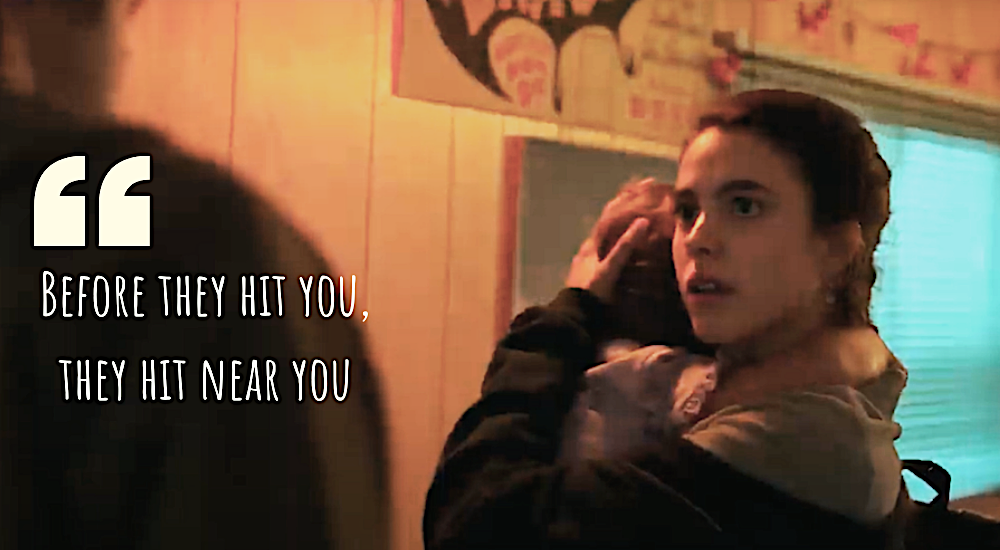 Netflix’s web series Maid presents the story of Alex, who fights her way out of an abusive relationship, something all too familiar even in the Indian context…

When I came across the series a few days back, I remembered the award winning movie The Help, and thought it might be something along similar lines. But the opening scene shows a young mother, Alex, quietly escaping from her house with her 3 year old daughter, Maddy, in the middle of the night.

Alex runs in fear, without any destination in mind. Her mind recounts the harrowing violent episode by involving her husband. But according to her, it is not domestic violence – because he was drunk and punched the wall next to her face! Alex brushes it off until someone points out to her that the wall he punched could be her face next time.

That’s how domestic violence works- there are too many shades to it, but until black and blue is visible, it’s not considered ABUSE!

Similar to an Indian homemaker without marketable skills or experience

After Alex has run, in the absence of proper education or prior work experience, she becomes a maid for the interim period to support her child.

In the Indian context, if a married woman walks out of the house, she is left financially bereft if she has been a homemaker who put the priority of her family first or let her career pause for motherhood or caring for the in-laws. While these major decisions are often led by family elders, only the woman is left behind to face the consequences.

According to me, the maid role is symbolic of the passage she traverses, wiping the slate clean in life and coming out shining. The passage is not easy, it is ridden with ups and downs – but Alex doesn’t give up, not for herself or for her toddler Maddy. When she finally gets to see the daylight, it’s a rewarding experience even for the audience!

Alex is alone in her fight- except for the show-stealing toddler smiling innocently in the backseat of her car. Everyone lets her down repeatedly. It is important to think about the layers leading to a single mother being left to battle all alone.

Alex rushes to her mother Paula for help, but is disappointed to be blamed for ‘deserting’ her husband.

Her mother’s logic of letting the man provide for her and the child shatters Alex. But she still holds her ground of being a single mother despite the barrage of discouraging remarks from her own mother. At one point, when she tells her mother that financial abuse is a form of emotional abuse, Paula classifies it as mind overthinking issues.

Ironically Paula herself was a victim who escaped with a 5 year old Alex. To top it off, she loses her fortune to her spouse she trusted to handle her finances. Despite these mounting issues, she still believes her daughter needs a man!

Basically, the pattern of normalizing abusive behaviour in exchange for a roof over the head is universal. In the Indian context, this will be further doused with society’s perceptions on separation and lack of financial independence. Voila, we have the recipe for a disastrous legacy to be passed on to the daughters.

Last year, the release of Thappad brought heated debates on this subject. But it subtly showed us how the daughter’s family is more forgiving of the son-in-law. Ultimately, the family nudges the woman to accept whatever and clips her wings, not letting her stand on her own feet!

The landscape of Maid showcases the various support systems that can be availed by the domestic violence victims in the USA. Alex gets temporary accommodation in a domestic shelter, gets housing, daycare and even financial assistance to a certain extent. But the loops she has to jump through to get there are fairly heartbreaking. To get subsidized housing, she needs a job which she can’t get without childcare. And guess what, without a job, she can’t get the daycare either!

She loses custody of Maddy in the process where the judicial system gives her no chance to state her side of the story. In a way, the cards are stacked against her because she has no bruises to show, or didn’t know how to lodge a complaint! But has anyone invented a scale to measure the emotional abuse involved?

If the system can be challenging in the Western countries, just think how bad it can be in India where there is next to no system at all, with even those supposed to be giving help shaming and blaming the survivor. If she chooses to leave her husband’s family with a toddler in hand and no employment, will she even know where to go? It starts with the often non-operational helplines, the often apathetic orgs, and then spreads to the absence of the concept of social employment with dignity or financial assistance. Can you imagine an Indian woman from a certain strata of society getting into menial labour? She would rather honorably suffer by returning to the abusive household and not look back for a lifetime.

Maniacs in the Manhood lane

In the centre of Alex’s struggle, there are 3 men who play a key role in exacerbating her plight.

Firstly the husband Sean, who feigns remorse to win her back but swiftly reverts once she is under his roof. He manages to control her money, her phone, and even whom she gets to meet! He uses the pretence of alcohol addiction which he is working to get out, of as an excuse to justify his misbehavior. This side of the story is so typical of Indian households, especially in rural parts of the country. Apparently his ‘heart is in the right place’ for the good of the family, but somehow his feet just get him to the liquor shop everyday. Furthermore, it is justified for the ‘stress involved in his daily work’.

Secondly, Alex’s own father who abused her mother during her childhood. He conveniently never admits to his fault because he was (also) under the influence of alcohol. Instead, he channels his affection to support the son-in-law to get out of his addiction! He even watches Sean intimidate his daughter, but passes it off as a young couple going through a rough patch. As a father, he chooses to remain helpless because he sees a bit of himself in her daughter’s abusive husband. So the cycle of how a girl’s parents can take a step back is now complete!

Lastly, the friend who tries to help but not with unconditional love. The fragile state of mind of a single mother trying to find her footing is almost invisible. The supportive hand he lends loses its value when he expects something in return. Leaving a noble deed concealed is a lost art, especially when it comes to helping women in a vulnerable state.

Towards the end, I was left wondering-  if Alex was in India, what would be her choices?

First of all, will she realize that emotional abuse is far more powerful because it goes unnoticed? Next, if she decides to break out of it, will there be enough people to stand with her, or do they prefer mediation for her return? And last, if she walks the path less taken, does the system support her journey?

Well, Alex in Maid got a few of these to hold on to- I wish Indian women would get them too in the future.

The post Netflix Series Maid: Emotional Domestic Abuse Isn’t Recognised Unless There Are Visible Injuries! appeared first on Women's Web: For Women Who Do.