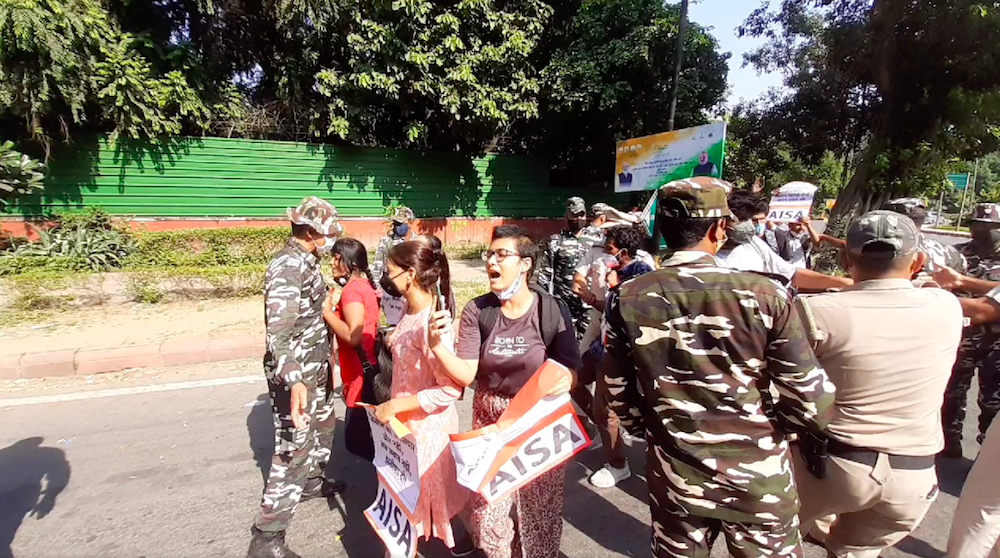 We need better sensitivity training of policewomen to follow protocols for tackling women. Policewomen cannot use sexual assault and gender based violence to tackle women protestors.

Trigger Warning: This describes sexual assault and police violence against women, and may be triggering to survivors.

Recently a group of women from Delhi University organised a protest in front of the residence of the Home Minister of India in Delhi. They were demanding the arrest of the minister’s son Ashish Mishra for killing farmers in Lakhimpur Kheri in Uttar Pradesh, a few days ago. They were also demanding that Ajay Mishra, who is the Minister of State for Home Affairs in the present Union cabinet and the father of the man accused in this incident, must be sacked.

All India Students’ Association (AISA) has alleged that two of their members were physically and sexually assaulted at this protest, as reported in The Wire. One of the women assaulted has written a detailed account on Twitter of the same, along with an audio clip of a call they made from there during the assault. There have been protests after the incident to call out the sexual assault of the women, as reported in The Hindu.

It is unfortunate and alarming that such instances come into limelight only when survivors come out in the open with their experiences, and they have been so normalised that every time a survivor comes out, many people start blaming them for their plight.

This is not an isolated incident

The right to protest is a democratic right, and often exercised by young students to publicly voice their discontent about any issue. Women are particularly vulnerable in such places not just by ordinary public but even by the police who get aggressive to dissolve such protests.

There was a mass assault on February 6, 2020 when a large mob of intoxicated men had forced their way onto the campus of Gargi College in New Delhi, while the police remained silent bystanders. The incident was widely reported by media and had shocked the entire nation.

The rising number of women students enrolling for higher education is a positive change, but we can’t expect these women to restrict themselves to just their textbooks and exams. An education also means that they become active and aware citizens and often participate in student politics too, which is their right as citizens. However hostile campus environments force many women to either discontinue their education, or hush up about their experiences.

The patriarchal systems demand silence from women, and often resort to brutalisation if the women refuse to toe that line. Women from minorities like Dalit, Muslim, Tribal or Women living with disabilities are even more vulnerable in such volatile situations as the forces of patriarchy, casteism, communalism and sexism join forces to oppress them in such instances.

The Police have guidelines, protocols, but how are these being used?

India has a rather long and gory history of the police being hostile and oppressive towards its women, especially those in custody. It is sad and rather unfortunate that Gender-Based Violence (GBV) is often used as a tool by the state and its various law enforcement agencies against political women, or women publicly standing in their opposition.

Of course, it has been advised that having more  women in the police force might make it more gender-sensitive, but often that also proves to be counter-productive. It is almost as if the lady police officers are there so that the male police don’t have to deal with women, keeping them safe from any possible accusations of ‘outraging modesty’ of women, one more patriarchal tool to protect men. The tactics, force, shame, and violence used against women remain the same.

A 2017 report Tackling Violence Against Women: A Study of State Intervention Measures asserted that attitude of police may shape victims’ perceptions of police responses and helpfulness, determining their future willingness to report incidents and call the police for help.

Indian police are notorious regarding overlooking protocols and flouting all norms when out in the field handling a volatile situation.

The Data on Police organisations 2019, Indian Bureau of Police research and development states that there are 158 police officers for every 100,000 people. This clearly indicates an overburden, and very few of these officers are women who can handle women-related issues with maybe more empathy. The Indian Ministry of Home Affairs in July 2020 had issued an advisory to all state and union territory governments urging officers “to act firmly against any abuse of law.” This ‘acting firmly’ often goes out of hand, and women get assaulted and brutalised regularly.

A National Campaign Against Torture (NCAT) report indicates that 60% of deaths in police custody in 2019 belonged to poor and marginalized communities — Muslims, Dalits and Indigenous tribal communities. The number of women here is not significant, because often the assault on them is sexual, and not even reported.

What can be done?

The overstretched and Understaffed Indian police force needs more people, but also people who are trained well in sensitivity of the diversity they get the power to ‘control’.

Police must be a safe space for citizens even when they are delivering their duties of maintaining law and order. Torture is endemic in India and has been a part of law enforcement and administration of justice since the British rule, this needs to change.

Police reforms have been a long-standing demand in India. The modern-day police need to be sensitive of the human rights of the people it is handling and also of their specific vulnerabilities. Under no circumstances must the police use disproportionate violence, fear or shame to enforce an order, whatever it maybe.

The post Women Police Allegedly Brutalise AISA Women Protesters, Injure Private Parts. Where Are Our Sensitivity Protocols? appeared first on Women's Web: For Women Who Do.